A prominent part of the saga called Americana is the legend of the old Mom and Pop shop at some sleepy two lane highway, where you can get the best of something, be it home made quilts, knives, rocking chairs, straw hats, or any variety of local food.
Of course, only a few living souls outside the neighborhood are privy to the information where to find these places, but sometimes an unprepared traveler might also stumble into the store, restaurant, or whatever Mom and Pop shop there is.
One of those authentic places exists in New Hope, and it is a BBQ joint. Operated by local folks, who fall more in the category of Mom and Pop of Mom and Pop (which would be Grandma and Grandpa, just to be clear here …), it seems to be one of those places which are part of the local tradition and basically embedded into the landscape.
New Hope Bar-B-Que is first and foremost a carry-out operation, and no, there is no such modern flim-flam as a drive through. You get out of the car, young man, walk up to the counter and politely place your order there.
Which I did. Could I have a pork plate, please. Sure, it comes with slaw, baked beans, and baked potato salad, is that okay? Yes, thank you, that is fine. And what kind of sauce do you want – we have hot and mild. Well, how hot is your hot sauce? Well, it’s made of apple-cider vinegar and cayenne pepper, my own recipe, and it will bring out the meat flavor really well. Tell you what, I just give you one cup of both, and you can just pour a drop of the hot sauce on it and decide if that would be too spicy for you.
So, I gave him ten bucks and he gave me the meal - which came in one of these Styrofoam carry-out boxes with plastic utensils - with a canned Coke to drink, and the two different sauces.
Since I did not want to eat this in my car, and they have three tables and a few chairs there, I just sat down at one of the tables. A little boy, probably their grandchild, carrying a toy hunting rifle with a scope, immediately came over, but left bewildered after he saw me taking pictures of the food. That is most probably not the normal behavior in New Hope. They usually just eat their food there, I reckon.
Of course, after I was done with my camera, I ate the food, too. And not having done so would have been a shame, because it was actually very good.
The meat did not have that kind of overwhelming smoky flavor that totally covers the pork taste. It was very tender and a little bit on the dry side, which I really like. No mushy wetness here that leaves the meat spongy and soggy. Big chunks, too, which I also like very much. And grandpa was absolutely right – his home made hot sauce really underscored the meat flavor in a very pleasant way. And it really was not too spicy, but had a wonderfully aromatic sour flavor through the apple-cider vinegar.
And the mild sauce, a thick red concoction with only a hint of spiciness on it, but also more on the sour side, was very delicious, too.
The best part of the sides was definitely the slaw. I like it when the cabbage flavor is not completely suppressed by the sauce, and in this case the sauce added just the right amount of tartness. The potato salad was not too bad, either, but basically on par with numerous others I had so far. As for the baked beans, the taste seemed to hint on the possibility that they came out of a can.
So, although I do not live even in the remote vicinity of New Hope, but it took me almost an hour to get there from my house, it was an enjoyable experience. The food was really good, and it doesn’t possibly get any more authentic than this. And also, during my meal there, I learnt all about the different hourly rates for work in the local job market. It seemed to be the topic du jour, because everybody who came in to order just chimed in, so it was kind of a never ending chat, only with constantly changing participants. This must be one of those local customs, which are indispensible to adding flavor to the saga that is called Americana. And it also helps to have that experience over a good meal of southern BBQ. 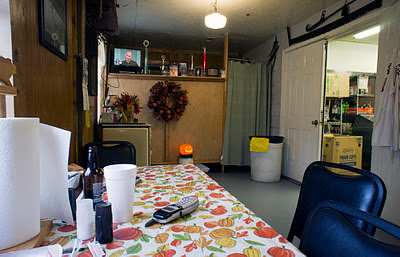 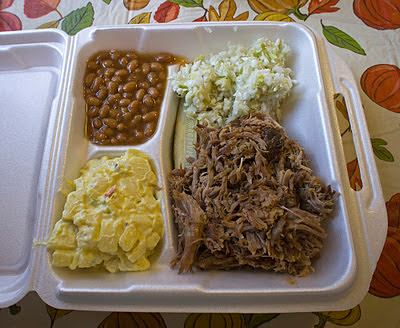