The Gibsons are for BBQ in Northern Alabama what the Kennedys are for politics in New England – not only a dynasty, but an aristocracy.
It all began in Decatur, Alabama in the 1920s, when Big Bob Gibson began cooking BBQ in his backyard and soon after opened a regular restaurant.
In 1956, his daughter Velma came to Huntsville with her husband and they opened a BBQ restaurant there, on a dusty road in the middle of cotton fields, what once would become Huntsville’s Memorial Parkway.
Since then, ownership passed through four generations of the family and they opened a second restaurant, not very far from the original place, on Whitesburg Drive.
There is also place in Huntsville that is called David Gibson Barbeque, on Bob Wallace Avenue, which is run by a different branch of the Gibson family.
You might think this family knows how to do BBQ and you’re darned well right about that – they definitely all play in the MLB (Major Leagues of BBQ, just in case you might confuse that with something else).
From the outside, the Whitesburg Drive restaurant is inconspicuous. The big lettered name of the place is even on the opposite side of the entrance, because that’s where you can see it best from Memorial Parkway. Inside, the one big dining room is reasonably clean and friendly, but quite frankly it could use some renovation. The ceiling is not exactly spotless, the restrooms have the flair of a 1950s trucker bar, and the walls could need some painting, too. The furniture is simple wood, which makes for a somewhat homey atmosphere.
You order at a counter from the quite extensive menu, which has all the staples of Southern BBQ cuisine to offer – including hushpuppies and fried okra. The food is brought to your table in a very short time, and the employees are all very friendly and attentive. They serve the meals on compartmentalized plastic plates, with metal silverware and Styrofoam cups for the drinks – china plates would be totally out of whack here, anyway.
As usual, I had the Pulled Pork Plate (large), with potato salad and cole slaw, and my wife had a half slab of ribs with cole slaw and fried okra.
First of all, the portions are large. The price is fairly standard, but they give you a lot of food for your money. The pork plate came in at about $11, the ribs at $13, plus drinks, and as an appetizer, you will get a tray of hushpuppies with butter.
The hushpuppies were fresh and big and very tasty, although a bit too dry for my taste. My wife absolutely loved them and we split the tray five to one. After that, she was already not very hungry anymore, but the ribs just looked and smelled too good to pass them by.
As I mentioned before, the portion of ribs was big, and they had a lot of meat on them, too. Juicy and yet firm, with just a little fat, they were as ribs should be. And the taste was great, even without the special sauce that came with it. This sauce was very dark red, and at first I mistook it for baked beans. But no, it was a special sauce for ribs, with a little spiciness to it, yet fruity and absolutely mouth watering. In fact, I have a little fountain in my mouth right now, as I write this.
The fried okra was crunchy, very fresh and the taste was great. We both had the cole slaw, which is of the vinegary kind, and from the very uneven cut pieces in there you could tell that it was hand made. My wife liked that it was not too sour, but more on the neutral side, taste wise, I would have wished for a bit more zing. But it was not bad at all and also tasted very fresh.
As for the potato salad, it was good, but no revelation. I still wait to be blown away by a potato salad one of these days. Until then, I can live perfectly well with what they serve at this place.
It absolutely pays off that they smoke their meats for twelve to fourteen hours - the pulled pork, as well as the ribs, had a wonderful hickory taste and was very tender and succulent.
You have the choice between two sauces and the ubiquitous ketchup. The first sauce is thick and red, and I expected it to be sweet. There actually is some sweetness to it, but also a good amount of spiciness, which gives it a very nice kick. It is not too hot, though, and would not leave a tingling impression in your mouth. For that, they have the second sauce, which has bit more thrust in that direction. It looks like a vinegar/oil basis with some ground chili in it. Very thin and watery looking, you it will surprise you with a kick in the pants.
As usual, I mixed those two sauces and it was very much fun to test the various mixtures, because all of my compositions were very tasty and complemented the hickory smoked pork perfectly.
So, would I recommend this place to a friend? Definitely, and also let’s say that I would do many things to keep knowledge of it from my enemies. And I certainly will also test the second restaurant they have in Huntsville – should be as good as this one, so I am really looking forward to this. 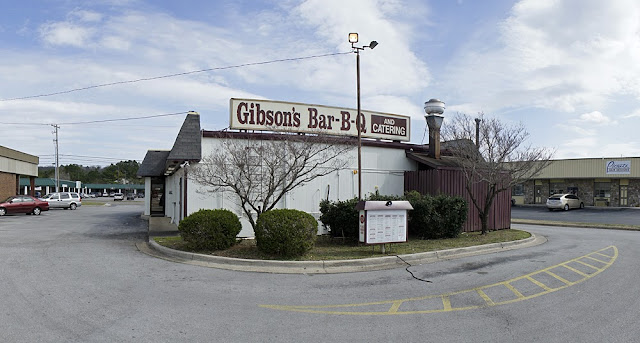 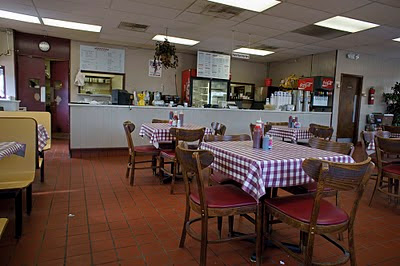 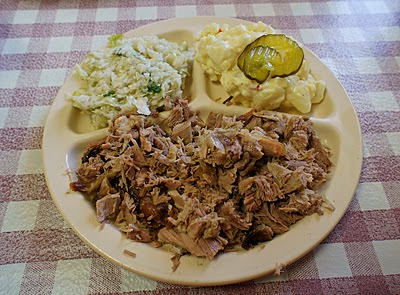 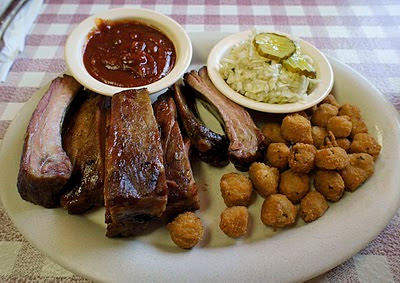