During my occasional travels, I try to sample BBQ at those near and far away places outside the Quest area. I just really, really like that stuff ...
With close to 140 restaurants in nine Southern States, a Sonny’s Real Pit Bar-B-Q restaurant is one of those places where you expect to find the least common denominator in BBQ.
Surprisingly, it is not that bad, well, it is actually quite tolerable.
I visited one of their places in Orlando, FL at South Orange Blossom Trail (there are two more restaurants in Orlando and about half a dozen more in the vicinity of that city).
The atmosphere inside is quite nice, with wooden benches in a light beige color, not too loud music in the background (some Best-of-the-80s mix), and it is clean and bright in there.
One of their specialties is the “All-You-Can-Eat” ribs menu. Additionally to of two flavors of ribs (southern style and dry rub), you can also mix slow smoked chicken, or pulled or sliced pork with it, until you are so filled up that they have to use the jaws of life to pry you out of your booth. For about fourteen bucks, that is a very good deal, I think.
But even if you order a regular meal, the amount of food is not too shabby.
I opted for the 3-Way-Combo, with sliced pork, pulled pork, and ribs, which was about $11, plus drink.
Instead of the usual potato salad, this time I ordered the fries, because the only potato salad on the menu was with sweet potatoes, which I absolutely loathe. Well, it is not really necessary to say anything about the fries, though, other than it was a very healthy portion.
The cole slaw I had as the second side was kind of bland, a bit watery for my taste, but tolerable.
The meal also comes with a choice between cornbread and garlic toast, and I am glad that I chose the latter, because it was really good.
Of the three (pork) meats on my plate, the pulled pork was the best. Although a bit soggy, it had a very nice texture and a good smoky taste. The sliced pork had more of a “porky” taste, which was a bit surprising but I actually liked it. The ribs were a bit disappointing, because they were not very tender and had not much meat on it. However, the taste of the few good pieces I managed to gnaw off the bones was very intense and smoky.
For sauces, they give you a lot of choices – Sweet, Sizzlin’ Sweet, Mild, and Smokin’.
Whereas the hot sauce is just that, without any other quality, the mild one is very fruity and also a bit spicy. Both sweet varieties are not that much different from each other, and are thick and sweet, and actually very good when mixed with the hot sauce.
But my favorite is the mild sauce, which can stand on its own merits.
All in all a very good variety, sauce wise.
One word about the service – slow. Not unfriendly, nor inattentive, but just very, very slow. And the place was not even full, there were only very few other guests in the restaurant with me at that time. Maybe it was one of those days, maybe it has something to do that they serve all those bloody tourists all the time, maybe I was just too hungry and thirsty to could have tolerated that. Whatever it was, it was still slow service.
But all in all, for a restaurant chain, I was pleasantly surprised by this place. You can actually get decent barbeque there, the portions are okay, and the all-you-can-eat option is just a very nice idea to really stuff yourself senseless with BBQ.
It won’t become my favorite place in the world for sure, but when I am back in Orlando, I know where to get my fix now. 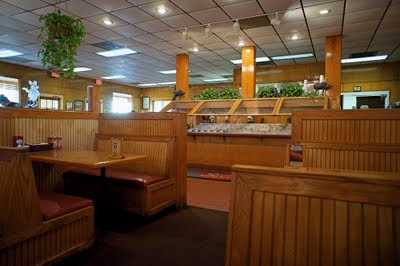 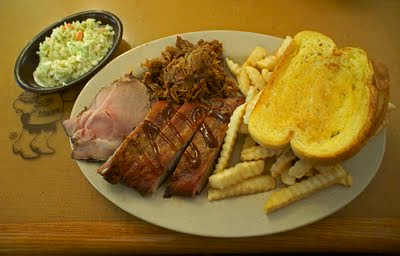 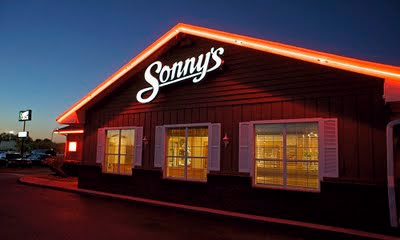