The Golden Rule Bar-B-Q in Madison, AL belongs to a franchise of 15 restaurants across Alabama, and soon also in Georgia.
While there is certainly nothing wrong in spreading out from humble beginnings, when you have a good product and the chance to grow, more often then not, a franchise does not bode well for quality and uniqueness eventually.
The first Golden Rule restaurant that opened 1891 in Irondale, AL probably was your typical Mom and Pop operation, with home made salads, sauces, and quite possibly also hand made lemonade.
Mom and Pop would take pride in their business and a happy smile from a satisfied customer would make their day.
But with success came branching out, and with that came a franchise concept - streamlining and uniformity.
And that is what you will find at the Madison restaurant today.
On the outside, the Golden Rule Bar-B-Q resembles a barn, which wants to suggest old time goodness and wholesome country cooking.
On the inside, it is a typical sports bar, with TVs on the wall, and a bar at the center of the dining room, and although it is very clean there, the atmosphere is quite sterile and exchangeable. No individuality, no charm, no decorations, no “barn feeling”.
But although the atmosphere certainly always contributes to the dining experience, let’s not get carried away here and concentrate on the main topic – the food.
Well … it very much resembles the interior of this place. No individuality, no charm, no nothing – it is, summed up in one short word, bland.
As usual, I had the pork plate with potato salad and vinegar cole slaw. The cole slaw actually tasted watery and bland, the potato salad was a little better but still bland, and the pork was tender and juicy with a crust, but also very much bland.
No problem, just pour some sauce on it. They have four of their special house sauces on the table, and the ubiquitous ketchup, of course.
The sauces are original, original hot, original sweet, and white. Very good variety, but unfortunately no rescue here either – the hot sauce is spicy but bland at the same time, the sweet sauce is sweet and bland, and the original sauce is only bland. Desperately, I tried to get some taste out of it by mixing all three in varying combinations, but to no avail. Probably should have tried the ketchup instead.
You also get a half a slice of toasted sandwich bread and a small corn muffin with the plate. I just wanted to mention that for completeness, not because any taste revelation had come out of it.
Also, for a so called “Jumbo” plate, the portion was quite regular sized. But I guess for $9, this would be acceptable. I just wonder what the regular sized plate looks like.
They also have a special lunch menu, where they promise that the side dishes are dinner sized. Ahem … what about the meat?! Well, I guess for $5.50 that’s somehow a fair deal.
My wife had the combo plate with ribs and beef brisket and fried okra and baked beans as sides.
The four ribs were not that big, but very lean and tender. They might also have been cooked and cured before being smoked, which would explain their blandness.
The brisket on the other hand was full of flavor and really a reason to come back. Tender and juicy it was, with a thick layer of fat on top of it.
The side dishes, however, are no reason to write home about. Some people may like cinnamon on their baked beans, but my wife surely is not one of them. The whole concoction was way too sweet. And the outer shell – the batter – of the fried okra was so solid, that it was an unusually crunchy experience.
I already mentioned that the place is very clean, and the personnel is also very pleasant and friendly. The meal is served with actual metal silverware on plastic plates, which seems to be quite the standard around here.
So, if you need a quick Bar-B-Q fix and nothing else is around, the Golden Rule might be a place to consider. But with about sixty different Bar-B-Q places in the greater Huntsville-Madison-Decatur metro area, you will probably never face this conundrum. 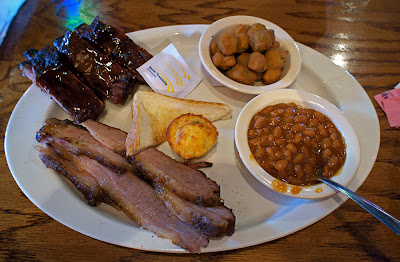 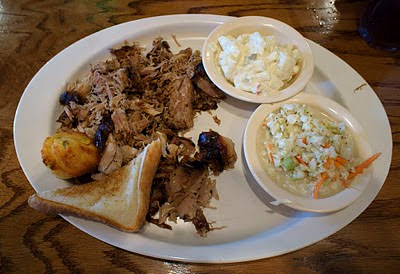 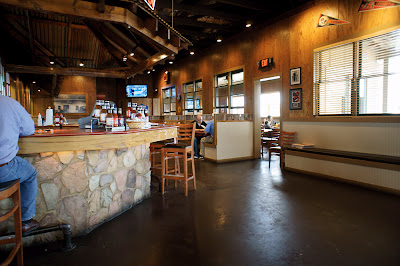