If is says “HOT” on a BBQ sauce, it is usually between a bit spicier than ketchup and a few notches below Tabasco. This should be tolerable even for those of us who eat only at those Mexican Restaurants, which have a “mild” section on the menu.
And that was what I was expecting when I poured the hot sauce at Lawler’s Barbeque on my pulled pork. In retrospect, it surprises me that the meat would not go off in a fiery inferno when touched by this devilish concoction, and burn down to a smoldering, charcoaled mass. Good thing that the local fire station is just a few hundred yards down the road – that stuff is lethal!
You would never guess it’s volatility by just reading the ingredients list – water (of course, check …), sugar (harmless, check …), vinegar (I like it sour, check …), and pepper (nothing wrong with a bit of …. HOLY MOLY…..!!!!).
My eyes were tearing up in a heartbeat, my nose was running, I had to sneeze constantly, I could hardly breathe and every single breath seemed to infuriate the firestorm in my mouth more and more.
And what is especially perfidious, is that nowhere, neither on the bottle, nor with a big, bold, flashing 6-feet high warning sign, they care to tell you that you better be careful with that stuff, and please do not spill it on your clothes because it will burn holes in it.
Instead of that, they have all those neat bible verses on the walls … and you will probably find them kneeling beside you, graciously praying for your deceased taste buds, once you regain consciousness.

Yeah, I know, call me a big sissy. But I rather stick to the less toxic varieties of sauce, you know, those which let the actual taste of the meat through, at least a little bit. And fortunately, they have those at Lawler’s, too. The rib sauce is the kind of gooey, dark red, semi-sweet and spicy sauce that my wife loves to scoop up with a roll. It goes very well with pulled pork, too, and also with ribs, of course. The mild sauce is a much toned down version of the hot sauce and I used it to mix it with the rib sauce, to give it a bit more bite. Used on pork alone, it really functions not unlike salt and pepper, but does not add too much flavor of its own to it.
They also have a white sauce there, too, and that is also quite good.

As usual, I had the cole slaw (vinegar style) and the potato salad, which are both very tasty and certainly above average. My wife had the BBQ beans and the green beans as sides, which also qualify for some praise.
But the real reason to come to Lawler’s is the meat. My wife had a plate of ribs, which came not in four to six single ribs, but in one big piece with about half a dozen ribs on it. The ribs are dry rubbed with spices and although my wife is also a big sauce fan, they were so good that she did not use any this time. The taste was exquisitely hickory and they were very tender – in fact, the ribs fell off the bone, with very little fat but quite a good amount of meat on them.
I opted for the Combo Plate with pulled pork and turkey, and while the pork was very good, tender and lean, the turkey was nothing short of spectacular. Not too dry, not too moist, with a wonderful hickory flavor – just perfect.

And not only the quality of the food was excellent, but it was quite a good amount of food, too. For about $9 for the large combo plate, and about $11 for the rib plate (all excluding drinks and taxes), each with two sides and a bread roll, this is a very good deal.
The place in Madison is quite new, just a few years old, and it shows. It is spotless (they had a 96 out of 100 from the health department when we were there), very bright and the wooden furniture also looks very new. It seats about 60 people, which contributes to the very homey atmosphere there. There is no service at the tables, you order at a counter and just a few minutes later you get your order there.
I already mentioned the bible verses on the walls, and apart from that they have quite some fishing related pictures, (fish)sculptures and other gear hanging there, and one big screen TV at the small side opposite of the counter – the owners are supposedly big fishing fans. Well, it shows.
The meals are served on compartmentalized Styrofoam plates, with plastic silverware and Styrofoam cups. You are supposed to clear your table after the meal and put everything in the trash bins near the exit.

You can find a Lawler’s not only in Madison, but also in Athens, Huntsville, Monrovia, and Lewisburg, Tennessee. All in all, there are seven restaurants of that mini-chain around here. They are proud that the pork is still “hand-pulled” at Lawler’s, and the franchise is still owned by the two guys, Phil and Jerry Lawler, who opened the first place back in 1978 in Pulaski, Tennessee.
The meat is not smoked at the restaurant itself, but to guarantee the same quality at each place, this is done at a central smoking facility.
Well, let’s see how good that actually works – although that would mean to do kind of a duplicate visit to the same place (which would take away a slot on my packed BBQ-places-to-visit calendar for another, new restaurant I had not been previously), I surely will be going to their place in Athens pretty soon. It’s just, they have such fantastic BBQ … 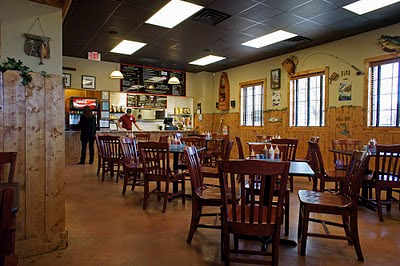 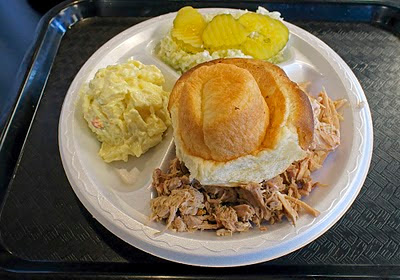 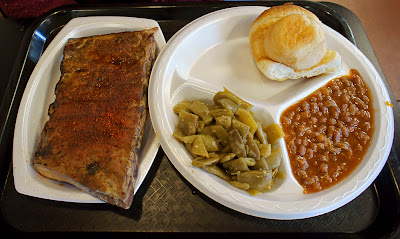