Far away from the beaten path, one will sometimes find the best things. Mainstream might be safe and familiar, but surely it is also boring and unexciting. Of course, something outside of the area of the common denominator might be disappointing, unacceptable, or even dangerous. But first, you have to find those places, because they usually do not advertise, there are no street signs, they are not on facebook, and they are hidden in locations where you probably never thought to find them. So, listen to the locals, they know. But do not assume that you can duplicate their experience. They grew up with that particular whatever-it-is, and so they are biased and think it is the greatest whatever-it-is in the World.

That is the way I heard of Mr. Crite’s. A Buddy of mine lives in Florence, and on his way to and from work in Huntsville, he often stops there and gets some BBQ for the family dinner. Another co-worker lived nearby for some time, and it was her family’s tradition to get BBQ from Mr. Crite’s each Saturday. Both raved about this place, so a year ago I checked it out. Alas, only from the outside, because it was closed. They have weird business hours there, and during the winter months it is open basically only Thursdays, Fridays and Saturdays from 11 AM to 4 PM.
But I would have not gone in anyway. Not only is this restaurant, and I loose the term very loosely here, in the freakin’ middle of nowhere, surrounded by woods and fields and all kinds of rural landscape. The building looks positively rotten from the outside, and one year ago I was not yet ready to accept that there was not necessarily food poisoning lurking in those shacks. Now, with a lot more experience under my belt and also having been to worse places during this quest, I am not that squeamish anymore. Or maybe I just am at a point in my life where I just accept my fate and don’t try to avoid it.

Anyway, as rotten as the building looks from the outside, the inside will not win any designer prizes anytime soon either. The light in there is dim, the ceiling is low, the floor is worn out, the furniture is a motley mixture of wooden picnic tables and ordinary tables, the space is tight, there is a beat-up air conditioner hanging in one of the two windows, while at the other window the glass pane is missing and all that is keeping the Alabamian Nature from creeping into the building is a holey fly screen. The only redeeming aspect of the interior is a cheerful mural on the wall that depicts some farm people with hatchets who are going after some hapless pigs. I’ve seen horror movies that started in places like this. Fortunately for me, I did not have a bulbous, blonde scream queen with me today, so there the probability for me ending up being chased through the woods by some toothless, overalls wearing Half-Zombies with Shotguns was pretty low.

What I did expect, though, based on the tales of my Buddies, was above average BBQ.
Didn’t happen.
When I hear the sound of a Microwave coming from the Kitchen, my mood goes down immediately. I am not sure whether it was the beans or the meat, or both, that was re-heated that way. And I was not there late in the day, when some stuff might have needed a little fire under the behind to bring it up to serving temperature. No, I was there ten minutes after it opened that day, so everything should have been bubbling and steaming without exacting it to those waves.
It certainly did not help to make the food better, but the baked beans were not very memorable to begin with. Not very sweet, not very tangy, kind of bland, of the open-a-can-and-throw-it-in-the-microwave variety. The potato salad on the other hand was creamy and very tasty, and had a made from scratch character.
The meat was kind of mushy and not the most tender I ever had. It also had a very prominent aroma, which either came from too much smoke or some weird spice they put on it. The taste was not bad, but it will also not become my favorite anytime soon.
I tried to counter that with some sauce, of which there were two varieties – one rather bland thick red sweet’n’spicy concoction, and one also thick and red and just spicy. Well, the sweet’n’spicy bottle came with a dried up plug of the sauce in the spout, which was kind of icky, so I just squeezed a tiny bit out to take a me measurement, but then stuck with spicy sauce. But here too, nothing to write home about. It was just a thick red spicy sauce, without any outstanding attributes.

Together with a can of soda from a fridge right next to the table I sat at, I paid just under nine bucks for the meal. I consider that a good deal, although the food was clearly sub-par. But I did not get food poisoning, was not bitten by a snake, had not black widow trying to befriend me, and now have eventually mastered my inner fear of rotten BBQ shacks. Bring it on. 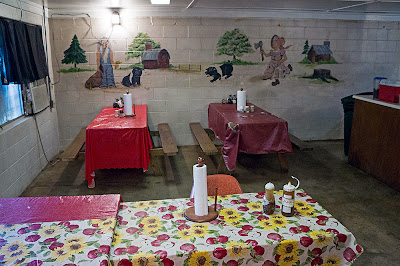 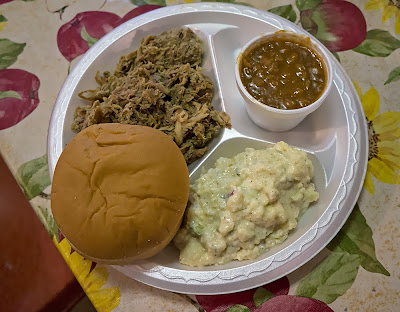 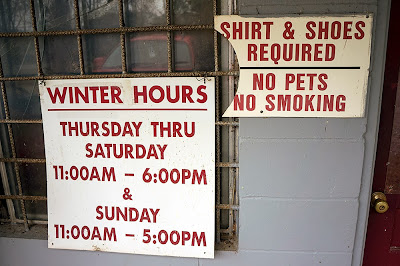