Remark: Sometimes I revisit a place. And if there is something to add to my comments, I do that. This happened here - see below.

Original comments from 30 Nov 2012:
The small town of Hatch, New Mexico, claims for itself the title of “Chile Capital of the World”. Coming into town from the interstate, you have to cross a bridge over the Rio Grande, the “Great River”. And Sparky’s Burgers, Barbeque & Espresso, which is located smack in the middle of the town, is claiming that they are the “Best BBQ in the Southwest” and also the home of the “World Famous Green Chile Burger”.
That is a lot of superlatives for a town of about 1700 souls at the crossing of nowhere and lost. And since I hadn’t had any halfway decent BBQ in this area of the world yet, I was naturally curious to give it a try.

At first, the combination of Burgers, Barbeque and Espresso seemed a little odd to me. But I thought, it is in the desert and to survive there you have to leave specialization behind and become a generalist. And why not have a good espresso after a sumptuous pork plate?
And quite frankly, when I finally saw the place, it was not weird at all anymore. The building itself is a tourist attraction of the first degree – a big Uncle Sam with a green Chile in his hand next to the parking lot entrance, whimsical figurines on top of the roof, Ronald McDonald and the Kentucky Fried Colonel sitting on a bench at the entrance, a sign inside that says “Even if you are the president of the U.S., we still won’t accept your check”, a big stuffed Moose’s head in the dining room … “quirky” does not even begin to describe the atmosphere of this place. I instantaneously loved it. There are so many wonderful details to discover, inside and outside – this restaurant has charm and originality, without drifting into the fake and artificial décor of so many “original” places made especially for tourists.

So, after the surroundings were very much to my liking, I was anxious to test the claim of “best BBQ in the Southwest”. Well, how good could it be, knowing from my own experience that the standard of BBQ in that region usually ends where the standard at home, in the BBQ Belt, just begins?
To find out, I ordered a pork plate with spicy beans and pineapple slaw. You have to cut the folks out west some slack – they cook with what the land provides, and so they put things in their dishes that may seem strange for the rest us sometimes.
But I must say that the pineapple slaw was extremely tasty, fresh and crunchy. Made with yoghurt and seasoned only very lightly, the pineapple in it was a very nice twist that gave the salad some distinct sweetness with every bite.
The spicy beans were labeled correctly – it was pinto beans with a kick in the butt. I bet they put some of that Chile in there, and maybe also some Cayenne Pepper. It was not uncomfortably hot, but surely not the sweet concoction we are used to here in the South. It harmonized beautifully with the sweetness of the pineapple slaw and the great hickory flavor of the meat.
The pork also had a nice pink ring and some seriously tasty bark. However, it was kind of mushy, with a squishy texture, plus there were some rather annoying blotches of fat and gristle in it, and that somewhat dampened my enthusiasm about this place. For top notch BBQ, you need to use high quality meat, and this pork was merely okay. That the BBQ sauce they had on the tables - a fruity tomato based creation with a moderate spiciness to it - was also very tasty did not really much to redeem the verdict on the meat.
Then again, for seven and a half bucks, what can you expect? Well, I had fantastic meat repeatedly for less than that, here at home.

So, is their claim to be the “Best BBQ in the Southwest” only one of those stupid superlatives they seem to be so fond of in that town?
Probably they are actually telling the truth. In that region, out of my own experience, good BBQ is hard to find. And while here, in the BBQ Belt, Sparky’s would probably rank in the lower midfield of the list of BBQ places, I believe that in New Mexico and the adjoining areas, they might actually be the top dog.
But what the heck, next time I am in the vicinity, I will go there again. To discover more whimsical details, to maybe try the famous Green Chile Burger, to have an Espresso and a piece of cake after that – but probably not to eat more BBQ there. 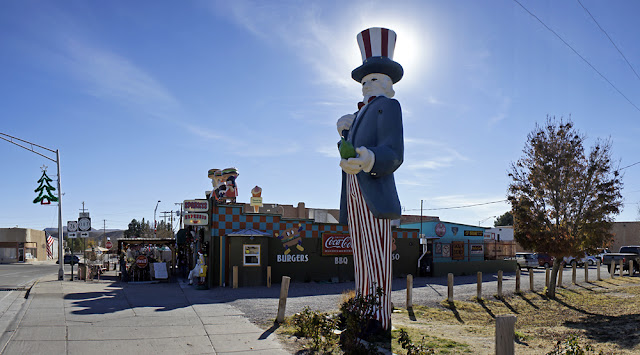 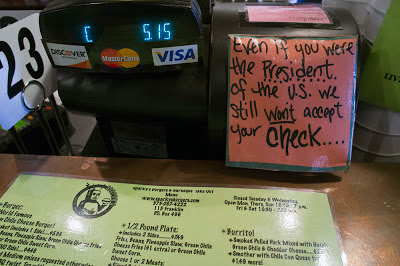 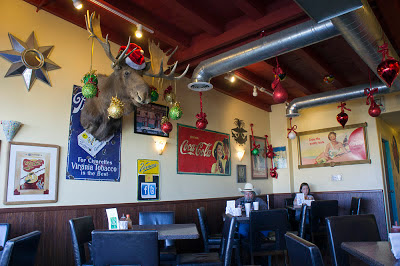 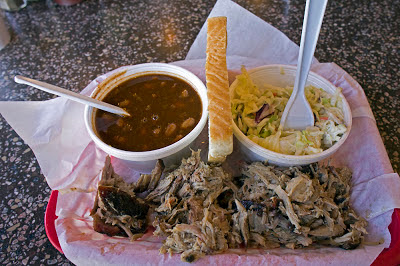 Additional comments from 07 November 2013:
And a year later, I came back – and had The Oinker. And a Cappuccino. Which led me to revise my previous judgment. Mea culpa.
So, The Oinker. A Green Chili Cheeseburger with pulled pork on top. Fantastic flavor, on the spicy side, of course, but nevertheless – a must have. I also bought a T-Shirt, because I had to make good something. In combination with a beef patty, some cheese and green chili, the pulled pork there actually works. Sometimes you just have to look a little to the left or right to find truly awesome stuff. So, whenever you are in the vicinity, go to Sparky’s and have The Oinker. And a cappuccino. And then just sit there for a while and contemplate the awesomeness of things. In general. Or with green chili on it. Oink, Oink. 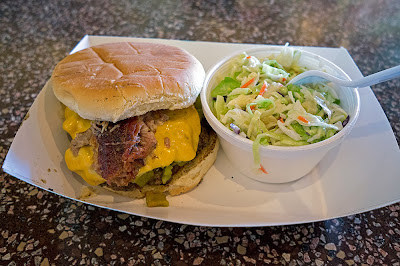