I love planes. And I love to watch planes flying around. Straight or in circles, in loopings or in Cuban-8s, in formation or solo, slow, fast, low, high, it doesn’t matter. And what better place to be then, than at an Air show? And if this Air show also has a BBQ competition attached, I am in heaven.

So I went to Rome, Georgia, to the annual Wings over North Georgia Air Show and their Kansas City Barbeque Society sanctioned Smoke’n’Thunder BBQ Classic competition.
The weather was perfect, the flying was exciting, and there were at least half a dozen big BBQ stands that sold their stuff to the Air show spectators. I picked one to have lunch from based on three criteria: it had a pink trailer, they were smoking in a small rig just beside the trailer, and the line in front of the cashier was the longest. Just must be good, don’t you think?

Well, I had the pork sandwich with a sweat tea and a bag of chips for ten bucks. The sandwich came wrapped in aluminum foil and without any fixins’. There were a couple of jars with onions and marinated peppers, but I took a pass on that. They had three different sauces standing around, from which I picked the one that had “Spicy” written on it.
Suffice to say, it was either mislabeled, or my taste buds were already numb from the smell of aviation gas that lay over the flight line. It was not spicy at all, and not really flavorful either. It is really hard to describe, because of the total absence of any aroma. But it lubricated the fairly dry pork real well, so it was tolerable. The meat actually had some smoke aroma, and it was tender and lean. It was also a sizeable portion, coming on one of those big buns, so I think, given the circumstances, I got my money’s worth.

I have no idea where the Triple D guys ranked in the BBQ competition. But based on my lunch experience, it can’t be too high. Or maybe they have a different standard in Kansas City. I rather stick to the North Alabama version of it. If only we had an Air show here once in a while. 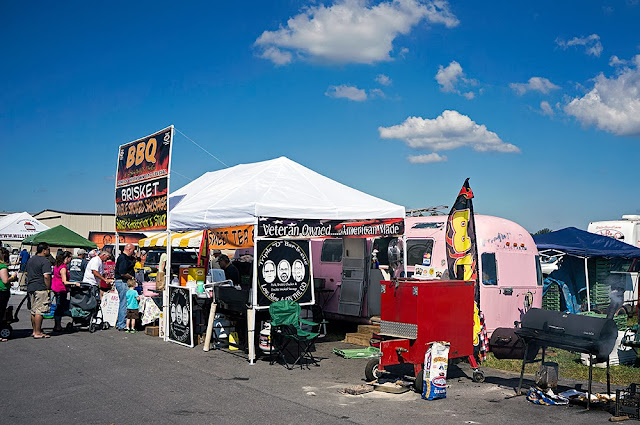 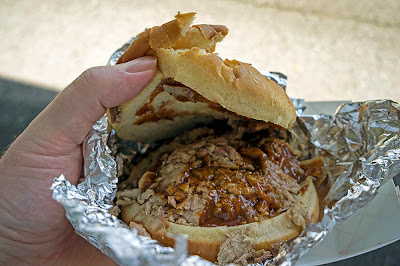