After I visited Big Bob Gibson’s main restaurant on Hwy 31 in Decatur in June 2011, I was very disappointed by the quality and taste of the food, and somewhat taken back by the in-your face display of their national notoriety, and of all the fabulous medals and prizes they have won for their sauces, which have an ingredients list that is as long as the Old Testament.
My conclusion was that we had better places for BBQ here in Northern Alabama. Lots of them.

Well, it took me one and a half years to make it to the other place Big Bob has in Decatur, on Danville Road. And I am glad to report that this visit ended in the partial redemption of this franchise.
First of all, the building does not scream “tourist attraction” from a mile away. It is a rather unassuming barn-style house, with rough wooden walls and a rather sober atmosphere inside. A few framed articles about Big Bob Gibson’s coverage in the media over the years is the only decoration, there are a couple flat screen TVs in the corners, and the rather spacious eating area has some booths and some wooden tables. Nothing fancy here, all very functional, no frills.

You order at a counter and wait there for your food to be prepared. I chose the pork and white chicken meat combo plate, with potato salad and baked beans. No slaw this time, because I still remembered vividly the train wreck that was the slaw at the other place.
My wife took the rib plate, with baked beans and slaw – a decision she regretted as soon as she spotted the alien-green heap of mushy cabbage on her plate.
We both took a small bite of the slaw and almost spit it out – disgusting. The texture was that of mushy grits and the taste was that of raw cabbage with some artificial sweetener in it.
The baked beans on the other hand were quite edible, although we both almost got into an argument out of what can they had come. The potato salad on the other hand was very creamy and had a refreshingly neutral taste. I can live with neutrality in potato salad, as long as it is not totally bland, which it wasn’t. It was creamy.

But now to the most important aspect, which led to a partial redemption of the devastating judgment from 2011.
The pulled pork was very tender and lean, and a bit on the dry side, which I don’t mind. That way, it soaks up the sauce better. And here, they had not only the famous supermarket-tested, award winning, endless ingredients list sporting red and white sauces on the table, but also a somewhat beaten plastic bottle with a simple spicy vinegar and pepper sauce. That stuff had a good kick to it, and was the perfect companion to the real nice smoky taste of the pork. And, it did not contain any of the chemical compounds of the other stuff.
The chicken, all white meat, was also a bit dry, but nevertheless very tender and receptive to the pepper-vinegar sauce. And the skin was just sublime – a heavy smoke taste with some crunch to it.
Also, the ribs my wife had tasted extremely well, with just the right amount of smoke aroma. They were not of the fall-off-the-bone variety, but firm and yet tender and succulent. My wife ranks them within the Top 5 of ribs she had in the last two years.
So, except for the just so-so or even disgusting side items, everything peachy in Big Bob’s Land?
Not quite. Please do yourself a favor and do not chose either the sweet or the unsweet tea for a drink – stick with the stuff that comes out of the soda machine. The tea has a very nasty aftertaste, especially the sweet variety. It kind of tastes as if they brewed it with water from the kitchen sink. Just nasty.

So, while this experience was clearly better than that we had in 2011 at the restaurant on Hwy 31, I still consider many other BBQ places a better choice. If they would fix the side items, and the nasty tea, this judgment might have to be revised. But until then, I think a little redemption is better than nothing. 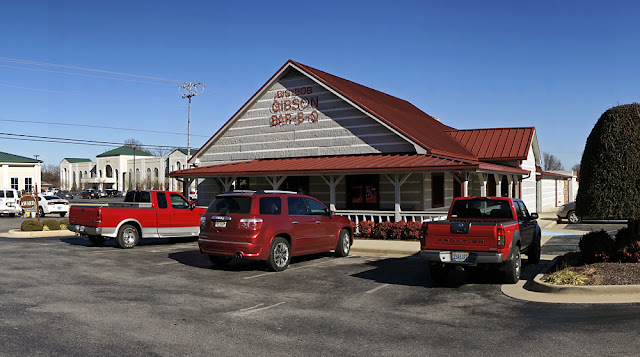 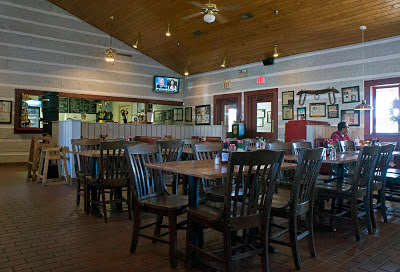 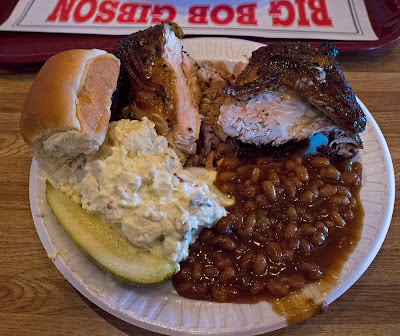 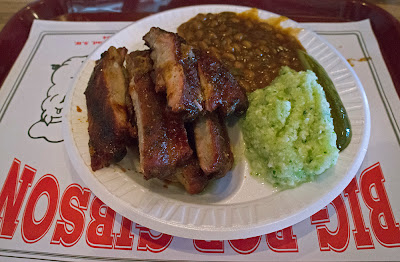