On my trip to Atlanta today, to attend two Braves games and spend some money at IKEA, I also looked out for a new BBQ place to visit.
Usually, when I go on a trip like this, I go online and check which BBQ places are located on the way to my destination, or at the destination itself.
This time, the rave reviews on the internet pointed me to a place in the middle of nowhere, adjacent to I-20 halfway between Anniston and the Georgia state line.

Marie’s BBQ House in Heflin, Alabama, was founded in 2005 and is one of those typical Mom-and-Dad joints you can find everywhere here in the South. The whole family, including children, grand-children, nieces and nephews works there.
They reside in a fairly new and custom built looking building that is littered inside with flags, pictures, and other decoration sporting the emblem of the other Alabama College Football team which won a National Championship in recent years.
There are some booths at the outer walls, and some tables in the middle of the room. The interior is bright and clean, and the furniture is modern and functional.
You order at a counter from a menu that has all the usual BBQ items on it – including Brunswick Stew all year long.
You can have your pork either sliced or chopped, but not pulled – which is kind of strange. My first thought was, is it not tender enough to just pull it off, so you have to use a metal object? Well, we’ll see.

As usual, I ordered a pork plate with potato salad and slaw. The pork came chopped – and with sauce already on it. Fortunately it was not drenched in it, but the sauce only covered about half of the pork. So I was able to actually taste the pork – it was tender. But a bit on the dry side, and not without some bigger bits of fat.
The taste was very smoky, yet not too intense. With a simple vinegar-pepper sauce, this pork would have made a wonderful meal. With the brownish-red sauce they poured over it, though, it was merely okay. The sauce tasted not very special, just your middle-of-the-road Memphis/St.Louis kind of stuff. What a pity.
The potato salad was of the creamy-mayonnaisy variety and had big chunks of egg in it. I like that, and the taste was fresh and just slightly sour, which made this salad one of the better ones I’ve had.
The slaw was also done with mayonnaise, and also tasted very fresh and creamy. There was a very nice crunch to the shredded veggies, and together with the smoky pork and the slightly sour potato salad, it produced a very harmonious taste.
You also get a thick slice of Texas toast, which is soaked in liquid butter.

For just a bit over nine Dollars, including sweet tea, the pork plate at Marie’s BBQ House in Heflin is a very good deal. The portion is fair and the taste, if you forgive them the so-so BBQ sauce, justifies a repeat visit. Too bad, that my next trip to Atlanta in two weeks will be by plane … 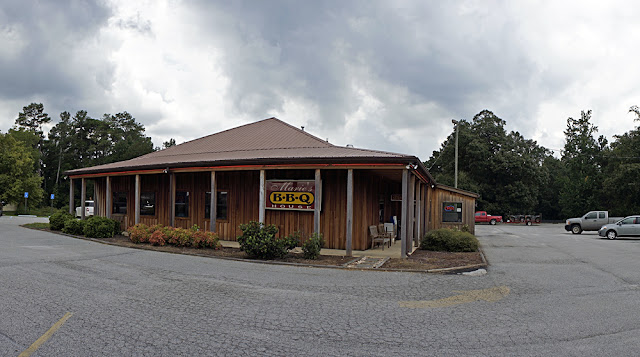 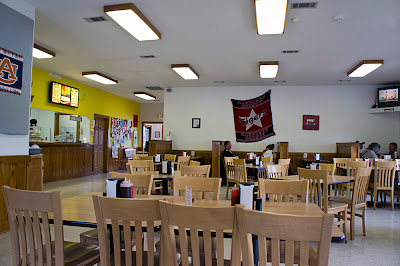 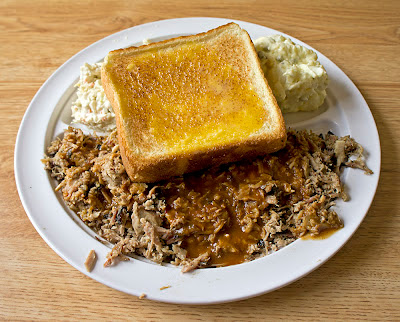