For many years now, several Burger empires have accessorized their beef-in-buns with the moniker “BBQ” occasionally. Most of the time that only meant that instead of ketchup, they slapped some dreadful “St.Louis style” sauce on it.
Yeah, right – if the sauce is sweet’n’spicy, that’s legitimate BBQ, regardless of what’s underneath.

So, I was on my way home from a Braves game in Atlanta, and my GPS told me to drive the northern route home. Very scenic, but not much of a BBQ area up there in the Little River Canyon region. Because I was hungry, I decided to not wait for a BBQ restaurant to cross my way, but to eat a quick burger at the first golden arches, castle or place that was named after a Confederate General I could find.

Hardee’s it was.
I always liked their burgers, so I went in and tried to find out what to order. My eye caught a sign above the counter that said “Memphis BBQ Thickburger”. Well, that sounded like one of those other burgers I mentioned above. But what the heck, I was hungry, had never eaten this before, and so I ordered the 1/3 pound variety of it.
Oh, and by the way, said the manager who took my order, this burger is not on the menu yet – I just hung up the sign a minute ago and it is supposed to be sold starting tomorrow. But because I must have looked really ragged, hungry, dangerous, or desperate, he told me that he would sell it to me anyway. And so I became probably the first paying Hardee’s customer in the USA to get a taste of this new creation.

And new it was.
“A 100% Black Angus Beef Thickburger®, Pulled Pork, BBQ Sauce, Crispy Onion Strings all on a Seeded Bun.”
Yes, indeed – it had pulled pork on it. Plus the 1/3 pound beef patty. Which makes this a carnivore’s dream burger, I guess.
Anyway, since the pulled pork was smothered in a not too bad variety of your standard supermarket BBQ sauce, I have no idea how the pulled pork tasted.
But the burger as a whole was just great – one of the best burgers ever. The different textures of beef, pork, onions, and the bun makes eating it a very interesting experience.
The BBQ sauce, as said before, is nothing special but gives it a kick in the right direction. The crispy onions on the other hand are hardly more than garnish and do not contribute much to the taste, which is clearly dominated by the BBQ sauce.

Although I would never classify this as a “BBQ Sandwich” in the classical sense, it is a novel idea to combine a burger with some pulled pork. I am absolutely sure that this is a staple of countless backyard and garden BBQ pit masters, but this was the first time I saw something like this in a mainstream burger joint.
And it was good, real good – as a burger. As BBQ sandwich … not so much. But still, I applaud the good people from Hardee’s to bring us something out of the ordinary, something else than two patties, a bun, pickles, onions … you get my drift. 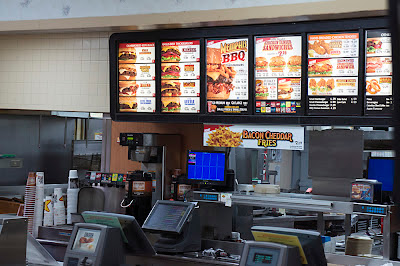