Wikipedia says: “Dirt road is a common term for an unpaved road made from the native material of the land surface through which it passes …”.
Well, here in the BBQ belt, we certainly have no shortage of dirt roads. And we are also not in short supply of BBQ places that you can only reach by that kind of road.
So, when this new restaurant by the name of Dirt Road BBQ opened a while back, I had a certain image in my mind. Trees, wilderness, red earth, a wooden shack, 4x4 trucks parked beside it … you know what I am talking about.
I certainly did not expect to eventually find this place in a posh little strip mall, with pastel colored shop facades, next to the busy four-lane Highway 24 between Decatur and Moulton.

While the location and the exterior is a bit, well, unexpected, the interior conforms more to the anticipation one might have towards a BBQ place.
There are half a dozen tables in the middle of the room, and some booths on each side of the room. All furniture is made out of somewhat raw looking wood, and there are some nice details, like the lamps being made out of zinc water buckets. That all generates a nice rustic atmosphere, which could probably be boosted considerably by adding some artifacts and pictures from the dirt roads of the region. But since they opened only recently, decorating obviously was not at the top of the to-do list. Substance over style, I reckon, is their motto until they are out of the woods, financially.
But then there is the concierge table at the entrance – yes, you will be seated by a server. And your order is taken and brought to you at the table. Haven’t had that at many actual dirt road joints lately.
The drinks are served in mason jars with handles, which some people may find a bit pretentious. But in my point of view, it fits the overall interior style of this place quite nicely. I can see this whole concept spawning to become a franchise in later years.
.
Looking at the menu and listening to the waitress, it was very clear that they love to fry things there. Fried pickles, fried green beans, fried okra, fried Oreos, fried onion straws … the decorating money seems to have gone into the deep fryer fund.
My wife ordered the fried green beans as an appetizer and that was a big mistake. One bite and we both were hooked. The actual green bean only served as carrier for the batter, and did not register that much, flavor-wise. But the batter – sublime! We used very little of the accompanying spicy dipping sauce, because the flavor of the deep fried beans was just perfect by itself.
So, after that already very nice experience, for the main course we expected the same high standard.

As usual, I had pulled pork, this time with slaw, fried potatoes and onions, and loaded potato salads as sides.
My wife opted for the brisket with baked beans, fried okra, and fried potatoes and onions as sides.
The pulled pork was succulent, tender and lean. It had a very distinctive meat flavor with a hint of smoke aroma to it. I’d say, they know what they are doing in the kitchen.
It comes with sauce already poured over it, which is always a reason to frown. But since it was just a sprinkle, and also the sauce is very good, I did not mind it that much this time.
A sticky red concoction, the sauce is slightly spicy and not very sweet, it is fruity and well balanced. I put it on the slice of toast that came with the meal and thoroughly enjoyed it even without the meat.
The slaw looked a bit iffy at first sight, some micro-sized pieces swimming in brine. But actually, the taste was just wonderful. The brine was not salty at all, but had a finely rounded sweet and spicy flavor, which tickled my taste buds in a very exquisite way.
The loaded potato salad was creamy and fresh, with a hint of Dill and only a slightly sour flavor overall – wonderful.
Unfortunately, the fried potatoes and onions were a bit disappointing – they were just bland. But with a good helping of Salt and Pepper, it also became a very good tasting side.
My wife’s brisket was just the way she likes it - a bit on the fatty side, very flavorful with a distinctive meat aroma. She also loved the fried okra, which were very fresh and very crunchy. She had a gripe with the baked beans, which were too sweet for her taste, but fortunately they did not have that overwhelming cinnamon aroma that seems to spread like a disease in some baked beans. She also salted and peppered her fried potatoes and onions, like I did.

Well, she did not finish the meal, but decided to leave some room for a desert. The banana pudding she ordered was freshly made and still warm. It supposedly is an old recipe from Granny, and it was certainly not bad, just a little too sweet for her taste.
For just under thirty bucks, we got a big amount of food of very high quality, all fresh and home made with great taste, and it was an overall very pleasant eating experience in a nice atmosphere. If only I could overlook the silly name … 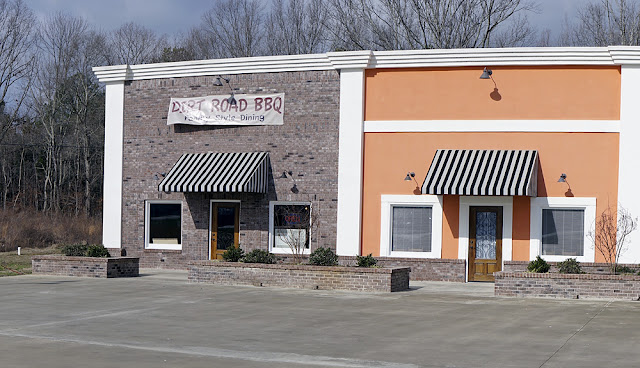 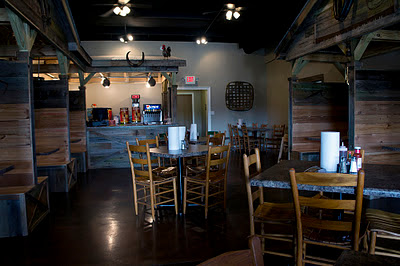 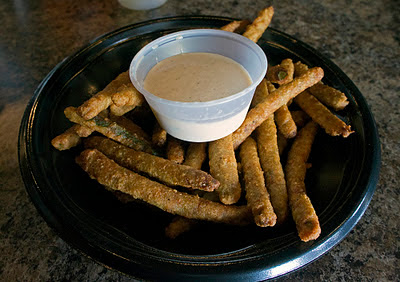 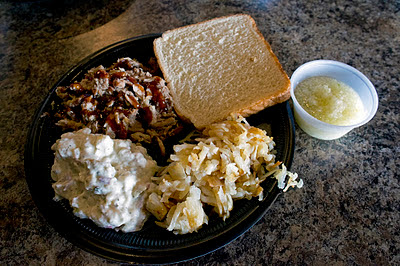 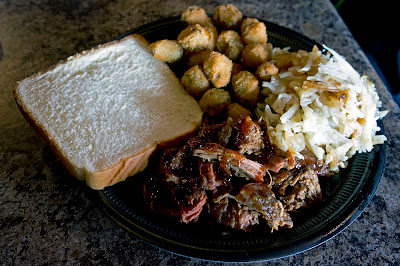 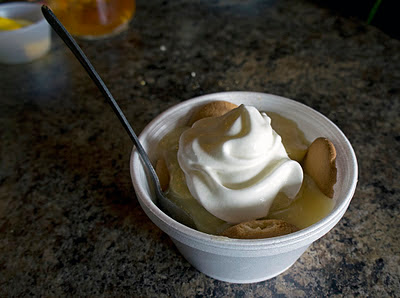