There are actually two places in Greenbrier, a small farming community a few miles west of Huntsville, where you can get your Bar-B-Que fix – the Greenbrier Restaurant is located in, well, “downtown” Greenbrier, whereas the Greenbrier Bar-B-Que is next to the Greenbrier Exit (3) of I-565, on Hwy 20.
Although they are easily confused with each other, bearing very similar names (the locals refer to the “downtown” location as the “Old Greenbrier”, although the other one claims to be the oldest Bar-B-Que in the Huntsville area … yes, things can be confusing here in Alabama at times), they are not related or otherwise connected to each other.
The Greenbrier Bar-B-Que next to the I-565 Exit is there since 1961, and has since become a Huntsville area landmark.
They serve the usual Bar-B-Que items, but also catfish, shrimp and crab. I am no big seafood fan, so I rather stick with the pork plate in those places.
One of the signature dishes at Greenbrier Bar-B-Que is their Hushpuppies. Not unlike the chips and salsa in a Mexican Restaurant, you get a basket full of those fried cornbread balls as a snack before the meal. Them puppies are not good for you, of course, but in all their fried, trans-fat glorifying, calorie burdened splendor, they are just a piece of the southern lifestyle. Soul food, if you will, that makes your heart sing, until your arteries are so clogged that the singing will stop eventually.
The variety they serve in the Greenbrier Bar-B-Que is actually one of the best I have ever had until now. They have just the right gooey-ness, with the perfect color and texture. The taste is great and you can certainly enjoy them without any sauce or dip on their own.
Apart from the puppies, I had the large pork plate, with potato salad and slaw as side dishes. The pork was very tender, but the taste was not especially “smoky-ish”, but rather more neutral than anything else.
But that is not necessarily a bad thing, because for the real Bar-B-Que taste, you need to poor some sauce over it anyway.
You can chose between a mild sauce, a spicy one, the inevitable Ketchup and a white sauce. The white sauce, of course, and everybody knows that here in Alabama, is for chicken. But you won’t get tarred and feathered if you (accidentally, of course …) use it on pork … just smile friendly when the locals give you that icy stare of disbelief, chuck down your meal quickly, and hope that your Japanese compact car can outrun their gun-rack-totin’ V8-Hemi-Triton-4x4-Offroad-Supercharged-ExtraHeavyDuty trucks.
But then, what sauce to chose? Well, don’t even try to reach for the Ketchup – this is only on the table for the occasional stray Tennessean, who lost his way in his own driveway and is staggering around now, half starved, on his quest to find the state border and get home to Mama safely.
The waitress does not even mention the Ketchup when she describes the sauces for you – a clear indication of the sauce pecking order. Well, she also does not tell you anything about the white sauce, either. After all, you ordered the pork plate, moron, and - doooh… white sauce, chicken, see above?!
It boils down to the mild and the spicy varieties then. The mild one is a bit on the sweet side, not unlike those “original, typical, 100% authentic” BBQ sauces you find in the local supermarket. The spicy one is spicy, but not too hot for my taste, maybe a notch or two below regular Tabasco.
Mixed together those two are just great.
So now I was settled, a good helping of my own mild and spicy sauce mixture on the pork, already filled up on hushpuppies, but nevertheless ready to dig in.
Well, not bad. The potato salad and the slaw were no revelations, but still get passing grades nevertheless. Together with the sauce-dripping pork it was a very tasty meal, nothing fancy or innovative, just a plain and simple good southern Bar-B-Que lunch.
For about ten bucks, with a soda, this is a very fair deal in my book.
The meal is served on plastic plates and bowls, with actual metal silverware, which is still not haute cuisine like, but markedly better than those places where you get styrofoam plates and plastic forks. As one can imagine, it surely is not the most upscale Restaurant on this planet, and might not qualify for a special award even in the Bar-B-Que scene, but it is clean (they got a 94 out of 100 from the health department), functional and somber. Other places adorn their walls with pictures, artifacts and memorabilia, whereas the Greenbrier Bar-B-Que only has that on a small spot at the counter where you pay your bill.
Service is quick, responsive and very friendly – you feel right at home there (well, at least until you pour the white sauce on your pork and ruin everybody’s day …).
To sum it up, it is a good place to eat, nothing special, but solid Bar-B-Que. 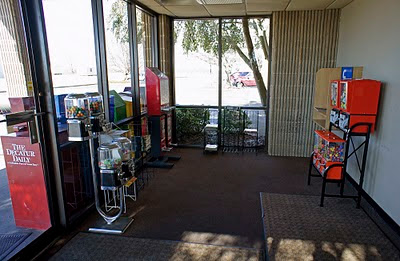 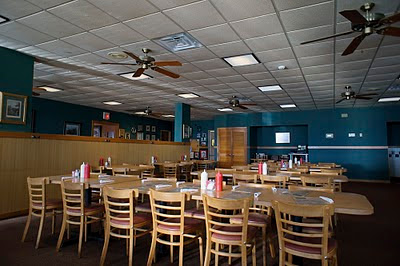 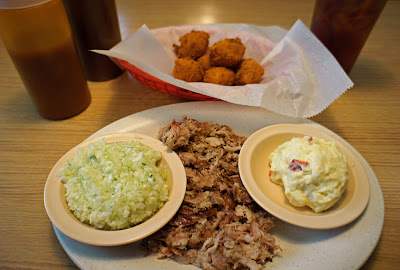