So, once in a while one or another of the national fast food chains decides to spice up their menu with a BBQ-themed item. It should go without saying that those ventures cannot be compared to our local BBQ – they are worlds apart. But as an alternative to the regular menu items, it might just work.

So, now Burger King, too. It is called the Memphis BBQ Pulled Pork Sandwich and comes with pulled pork, Memphis BBQ sauce, sliced onion rings and a sweet southern dressing. It looks quite nice in the advertisement pictures, so I thought what the heck.
Well, the one I got did not look quite as nice. After unwrapping it, there was this squishy, slobby, moist, and chaotic mass, which looked an awful lot like road kill. I am also pretty sure that the white sticky thing on it was cheese, which was not featured in the advertisement at all. Or, if it was supposed to be the sweet southern sauce, it was one rubbery concoction of a sauce.
Of course, the advertisement promises tender hickory smoked pork, but there was no way in the world to examine that – the whole thing was drenched in this supermarket-grade Memphis BBQ sauce, which was the only flavor I could determine. Even the onions tasted like it. Which is not to say that it was all bad. Not at all, if you do not expect a real BBQ sandwich. For a fast food offering it was acceptable, even more so because the small combo with fries and a drink only sets you back about five and a half bucks. But be warned – as the picture indicates, it is a real mess to eat. Get some extra napkins. 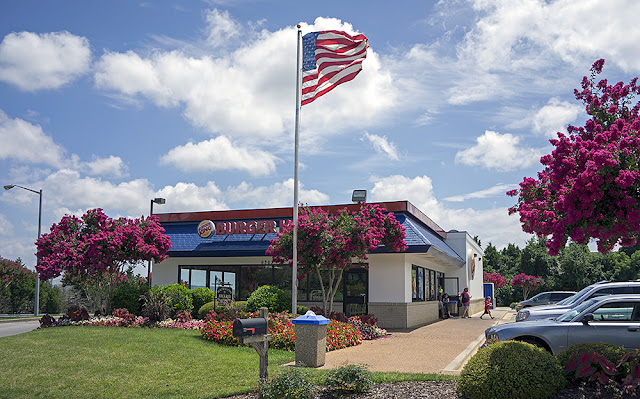 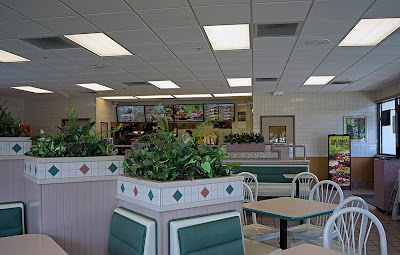 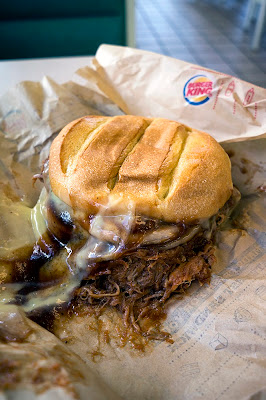