If you follow US Highway 72/Alabama Highway 20, the Joe Wheeler Highway, to the West, past Decatur into Lawrence County, you notice that the scenery changes somewhat. You are leaving the more densely populated part of the Huntsville-Decatur Combined Statistical Area to find yourself in small town America, with farmland and big silos by the side of the highway. The small villages there have names like Courtland, Leighton, or Town Creek. Nothing fancy, nothing special, just regular names.
Each of those towns has a gas station or two, a car wash, maybe a Dollar General, and possibly even a BBQ place. That is where all the local folks from the other towns that are not blessed with such an institution congregate. And after a few decades, that place has taken over the taste-buds of the region, and the BBQ they are serving there is deemed to be the best in the world.

Well, being an outsider, who has travelled the world a bit, I arrive with unbiased taste-buds and some experience of how they do BBQ in other places.
And so, my first impression of Henley’s Bar-B-Que in Town Creek was not very advantageous.
They also sell pizza there. Why, I do not know, and did not ask. I just found it kind of odd, especially since the pizza was not even made from scratch, but apparently came out of a box.
Well, since I did not see any dedicated pizza place along the Joe Wheeler Highway, this might be actually a niche were you can make money. So be it, but it felt a little strange to see a pizza on the counter, placed on a heating plate under a glass dome.
They also sell Blue Bell Ice Cream and milkshakes there, which goes much better with BBQ in my mind.

This all is situated in a big dining room that oozes the charm of an empty train station. The decorations on the walls are sparse, the lighting is bright and brutal, the furniture is boring and functional. The place is very clean and the staff is very friendly and nice, and they have a big screen TV in of the corners – but there is no atmosphere, no individuality, no charm.

Unfortunately, the meal I had was quite the same. Yes, it was BBQ, but it was unspectacular, had a strange taste, and the best part of it was the bread roll that came with it.
As usual, I ordered the large pork plate, with slaw and potato salad. Together with sweet tea and the tip, I paid about twelve Dollars for it – which does not register as especially inexpensive.
The pork, as I alluded to already above, had a very strange taste to it. There was no smoke flavor I could taste, but something very strong like celery, or lovage. Not what I expected, and certainly not very agreeable with my taste-buds. Moreover, the meat was somewhat oily and I found two big patches of fat and gristle in it. Putting the sauce I found on the table on it did help a little – it took the edge off the intensity of the strange flavor, but could not cover it all together.
But that was probably too much to ask anyway from a sauce that you could probably buy at the next super market.
The next disaster waited in form of the slaw. One word: Sweet! Nothing else, just sweet little bits of not very crunchy cabbage. The potato salad on the other hand was not too bad, but it had a strange aftertaste, like too much mustard or pepper went in it.
The folks in Town Creek and vicinity might think differently about Henley’s Bar-B-Que, and the fact that this restaurant is probably there since the dawn of time surely is testament to this, and I may a terrible mistake here, but I would rate the whole experience there as “once and never again”. This was just not good tasting BBQ for me. Sorry about that. 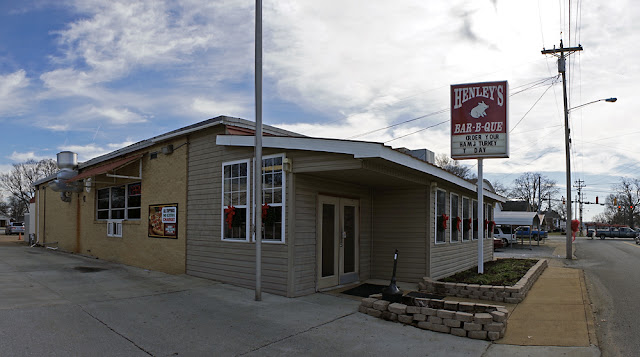 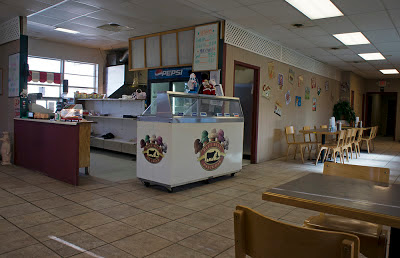 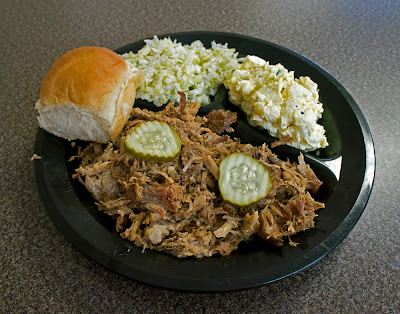