Why everybody who won a trophy at some BBQ cook-off does think opening a Restaurant is somehow a must then?
Usually, those folks win their trophy for a certain aspect of BBQ – for the meanest sauce, for the juiciest ribs, for the most succulent pork, for best garnishment, for most authentic cooking utensils, for the most crazy team name and so on.
Uncle Kenny, who “participates in BBQ competitions sanctioned under the Florida Barbeque Association (FBA) and Kansas City Barbeque Society (KCBS)” seems to win his prizes mostly with the sauce – according to the restaurant’s web site, “Uncle Kenny's Original Sauce is Ranked 14th In The World!!!!!!!!! But 1st in the Country!!!!!!!!!” (Note: Exact number of exclamation marks directly transferred from the web site)

14th in the world – I wonder who did this ranking.
Alright then, this I had to check out. But first I had to find this place. The street address I entered in my GPS led me on a wild goose chase, and I almost settled with some other BBQ place along the way, after I had searched unsuccessfully for quite some time. But then I remembered that the web site said explicitly “under the Citrus Tower”. So I looked for a water tower in form of a giant lemon. There was none. The only tower in the vicinity was a garish looking concrete structure with more antennas on top than a green man from Mars.
And sure enough, there it was, Uncle Kenny’s BBQ in Clermont, Florida, under the Citrus Tower.

Well, there are certainly more appealing surroundings for a BBQ place. The little strip mall under the Citrus Tower has certainly seen better days, and the outside of the restaurant itself is also not very likely to win any style awards.
On the inside, there is a big counter where you get your take-out stuff, and a somewhat small area with some booths and a few tables. On the walls hang Uncle Kenny’s framed accolades from various competitions. All not very cozy and special, but a nice atmosphere, nevertheless. Which is boosted considerably by the extremely friendly and attentive staff. I thought the counter would be the place to order, but instead I was seated and treated like royalty. They even refilled my drink for me, although I sat directly in front of the iced tea dispenser.

Because I was hungry and also had heard about the ribs being the best choice here, I ordered a two meat plate with pulled pork and four ribs. As sides I chose baked beans and potato salad. Two slices of Texas toast came with it additionally.
Yes, the ribs are the better choice. Very succulent and tender, dry rubbed, and with a distinctive oak aroma, the taste was wonderful. They did not fall off the bone, but were not tough at all, just a little compact. The first three ribs had a fair amount of fat with them, which could be easily avoided when pulling the meat from the bone. But the fourth rib was more fat than meat and so I the high praise from before in regards of the taste is becoming a little less enthusiastic towards the end.
The pulled pork was also tender, although somewhat dry, and it unfortunately came mixed with Uncle Kenny’s Original BBQ Sauce. So I have no idea how the pork actually tasted, but I know exactly what the flavor of the sauce is: dominantly sweet.
There are three sauces to chose from – the Original, the Spicy, and the Mustard.
As said before, the Original is overwhelmingly sweet, with nothing else worth mentioning. Sweet. That’s it. The 14th ranked BBQ sauce on this planet is just a sweet, sticky, otherwise bland concoction. Again, I wonder who did that ranking.
The Spicy sauce on the other hand is just that – very, very spicy. And that’s it. Spicy. Like the label says.
The Mustard sauce on the other hand leaves the one dimensional flavor of the two other sauces behind - it is sweet and has a mustardy undertone. I did not dare to pour it on the pork, though, because that was already contaminated with the sweet Original sauce. My curiosity stops where I have to add sweetness to an already sweet dish.
And quite frankly, the ribs were so good that I did not even think about spoiling them with either of those sauces. But with the Texas toast, the Mustard sauce was quite excellent.
Unfortunately, that cannot be said of the sides. The potato salad tasted like something you buy in a large container at the next super market, and the beans were quite bland. I probably should have drenched them with the Original sauce to get some taste on it.

So, this restaurant has its highs and its lows. Would I pay over sixteen Dollars for that again? Guess not. From where I stand, they do not need to fix the GPS error anytime soon. There is better BBQ to be found more easily. 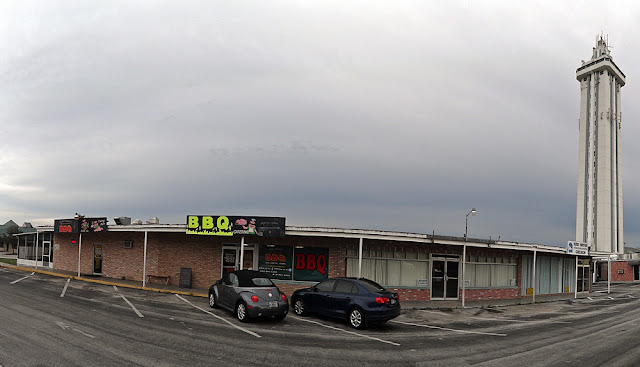 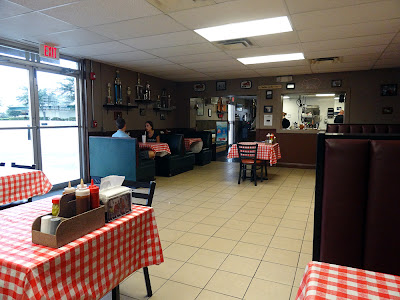 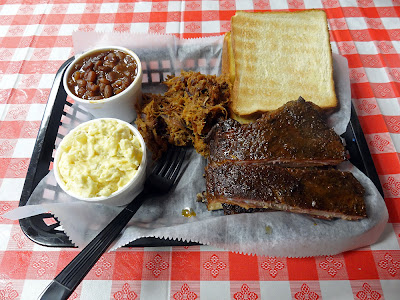