Line dancing servers. Buckets of peanuts on the tables. Peanut shells all over the floor. Big screen TVs with sports programs running on the wall. Willie Nelson as spokesperson. Andy the Armadillo as mascot. Margaritas with shot glasses inside. Over 380 locations in 47 states. One restaurant in Dubai. Annual revenue of over one billion dollars.

So, eventually we now have a Texas Roadhouse in the Huntsville area, too. Hurrah. Another chain, another “family steakhouse” restaurant. With the growth of this area, it is quite inevitable that places like this spring up more frequently in the future. After all, all the new people that are transferred from Army bases in the North need something to make them feel at home – you possible can’t expect them to eat in one of them BBQ shacks around here. Some of them have flies on the window sills, you know, it’s not sanitary and who knows what kind of road kill they smoke in their backyards to serve to the unsuspecting foreigner.
And if you think, well, maybe a Texas Roadhouse would only make folks from Texas feel at home, think again. The franchise was founded in Indiana, it has its headquarters in Kentucky, and most of the locations are above the Mason-Dixon Line, in the Atlantic North-East area. So much for authenticity.

But they have some BBQ items on the menu, so I was compelled to pay them a visit. To make it clear from the beginning, amongst all those Applechilithankgoditstuesday chain restaurants, the Texas Roadhouse is my favorite. They have very good food, the service is great, and even the extreme noise level works for us – it blends out the voices of our very active and loud kids.
So, although it would not classify as a BBQ restaurant per se, the fact that they serve pulled pork, BBQ chicken and ribs qualifies them to be part of this survey.

You can have the pulled pork and the chicken either as a sandwich, or a part of a two meat combo dinner.
I chose the pulled pork and ribs combo, with steak fries and green beans. No potato salad, no baked beans, no slaw on the menu. Bummer.
The first impression of the plate – lots of food, but my gosh, why did they drown the poor pulled pork in the sauce? That really borders on animal cruelty, just leave the meat as it is and let me decide what to do with the sauce.
My choice would have been to rather take ketchup instead. The sauce is one of those supermarket Kansas City style middle of the road non specific conglomerates, a little too sweet, and a little too sticky. Not really bad, but just the sheer amount of it made the pulled pork look like some kind of a stew. That’s certainly not the way to do BBQ. And how did the pork taste? No idea. Since it swam in the sauce, there was no one tiny piece of it left uncovered. It was tender, with just a very small amount of fat. But that is all I can say about it.

The ribs also came with sauce on it, but that was baked in as a wet rub. They had a very delicious and crunchy crust, but immediately under it came a thick layer of fat. There were some real nice chunks of tender and lean meat on the ribs, but that was hidden quite well by all the fat. The ribs were of the fall-off-the-bone variety, which seems to be the expected standard in those kinds of restaurants. The taste was quite smoky and actually very delicious, but it was frustrating to leave so much of the ribs, that is all the fat, on the plate in the end.

The green beans were garnished with some crumbles of fried bacon, and they tasted very good. The steak fries were okay, too.

So, while I would not recommend the Texas Roadhouse as a BBQ place, the food there is generally top notch for a chain restaurant. And for real BBQ, we have more than enough other places here in this area. 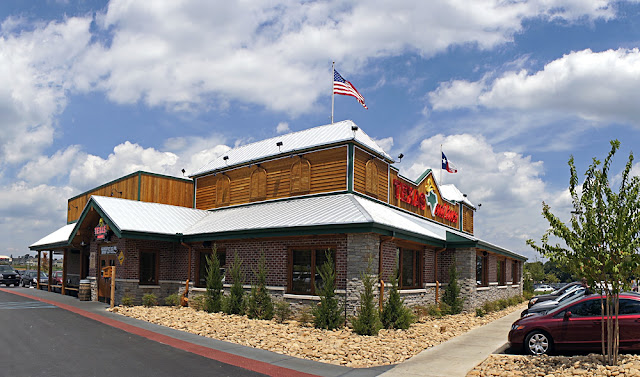 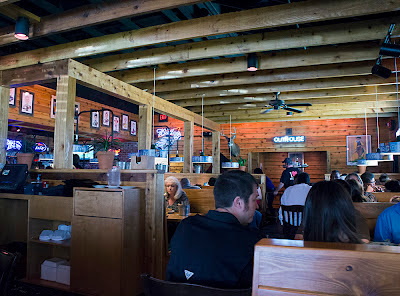 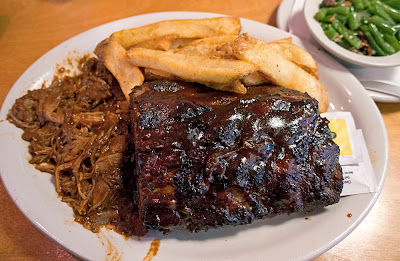