One might think, or even expect, that the food in every location of a restaurant chain would be roughly the same. More so even, if that chain has a “central cooking facility for quality control”, which supplies all satellite locations. Well, in case of Lawler’s Barbeque it is not quite that clean cut.
Lawler’s is not a big franchise, they have six locations in Northern Alabama and one in Southern Tennessee, and five of those are labeled “Express”, with limited or no seating at all.
My wife and I have already been to their Madison (Express) restaurant, which is a quite new, very nice place. Although the food was very good, we did not intend to visit another Lawler’s for quite some time. Actually, we wanted to go to the Ole Gin House BBQ in Elkmont, but they were closed. Then we opted for Denao’s BBQ in Athens, because we were both getting really hungry and it was just a twenty minute drive away. Closed, too.
Next try, Sarah's Waffle Chicken & Barbecue, also in Athens. The place where the GPS unit led us to had no such thing. Either we had the wrong address or the restaurant was closed, permanently. Rats! Our stomachs were getting really angry with us, so we tried alternative number four for that day – hallelujah, they were open! But just barely in time, because although not listed as an Express location but a full fledged restaurant, they close at 2PM, and we showed up twenty minutes before that. Confusing …
So, what makes a Lawler’s Express location different from a regular Lawler’s restaurant? After you order at the counter, in the Express they will call you to get your stuff there, and in the regular restaurant they will bring the meal to your table.
And whereas the Express in Madison is kind of new and shiny and very nice inside and outside, the restaurant in Athens is kind of old and beaten up. You are greeted by duck-taped upholstery in the booths, and sticky plastic table cloths. At least it is all clean, and the service is also quite nice and attentive, and you get metal silverware with your standard plastic plates. They have some old faded pictures on the wall and also some old tin advertisement signs. Here too, the Express in Madison is the more nice and shiny place.
As usual, I had the large pork plate with cole slaw and potato salad, and my wife had the ribs with fries and baked beans. And to our surprise, they have hushpuppies on the menu, so we both got those as well.
Which we shouldn’t have done. Too sweet, too dry, only tolerable with some sauce on it - no comparison with them puppies in the Greenbrier Restaurant.
And instead of four sauces as in the Madison Express location, there were only two at the table – the very peppery and really, really spicy hot sauce and some concoction without label which seemed to be a mildly spiced up vinegar. No mild sauce, no BBQ sauce, no white sauce – disappointing.
The cole slaw was less sour than at the Madison location, the taste was actually more “au naturel”, meaning that the cabbage flavor was very strong. The potato salad was quite the same and also the beans were not different from the Madison location.
The same is true for the pulled pork, which was also very tender and juicy and had a real nice smoky flavor to it.
But the ribs the ribs, the ribs … gristly, not very tender, without real taste. No, definitely not good. Maybe we just happened to run into a bad batch there, because at the Express in Madison, the ribs had been superb. Or we got the last left-over piece that day, because we came in so late. Be it as it may, my wife was not very happy and if she is not happy, I am not happy.
And after our odyssey of fifty or so miles that day to find an open BBQ place, to end up with bad hushpuppies and bad ribs … lets just file it under “one of these days” and be done with it. 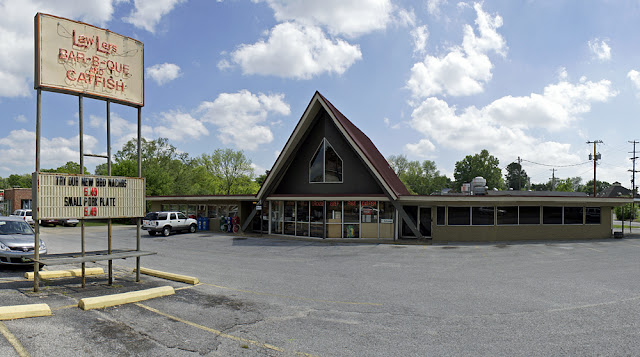 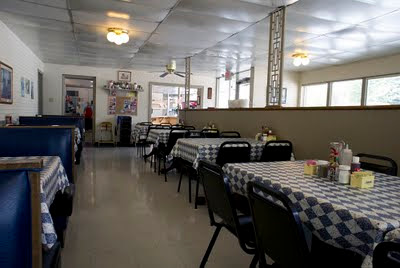 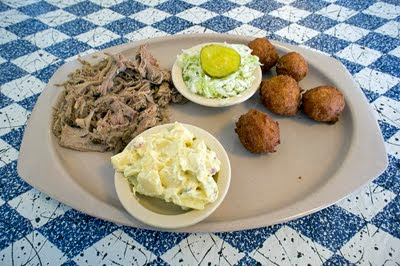 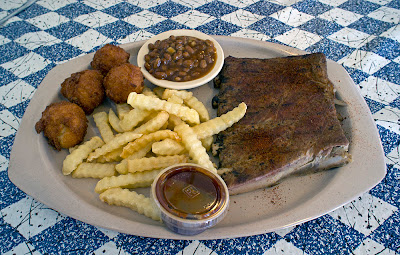